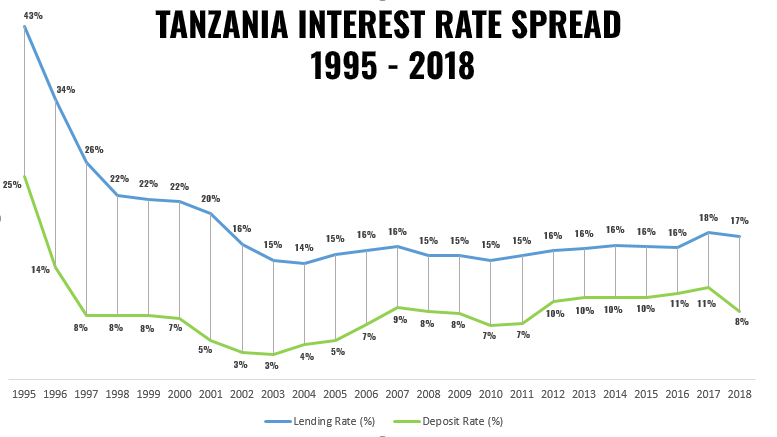 The Bank of Tanzania (BoT) Research Newsletter of July 2020 indicates that the interest rate spread in the banking sector remained high despite rising competition with the number of operating banks having increased from three in 1991 to 53 in 2018 (49 Tanzanian banks in 2020).

The BoT study further examines the determinants of banks’ lending interest rates in Tanzania and their relative importance.

Results on interest rates decomposition reveal that the main drivers of lending rates are operating costs, non-performing loans, and costs of funds. The three indicators account for 70.4% of small banks’ average lending rates while for medium and large banks, they constitute about 69.5% and 67.4% of the lending rates, respectively.

Additionally, Statutory Minimum Requirement (SMR) ratio appears to play an important role in all banks’ lending rates, but its share has been declining overtime consistent with the accommodative monetary policy measures pursued since 2014.

In 2020, the BoT introduced the latest reduction in SMR from 7% to 6% aiming to cushion the economy from the adverse effect of Covid-19.

The BoT notes that effort should be directed at improving operational efficiency aiming at reducing banks operating costs.

The key areas of attention are with respect to employees’ salaries and benefits, as well as rental and depreciation expenses. In this, banks may increasingly adopt Information and Communication Technology (ICT) as well as agent banking and service provision to cut on costs.

RELATED:  Bank Of Tanzania Takes Over Administration Of Bank M

Tanzania’s interest rate spread was 9.2% in 2018 compared to an average of 6.5% in other lower middle income countries.

Interview with Ineke Bussemaker, MD and CEO of NMB Bank