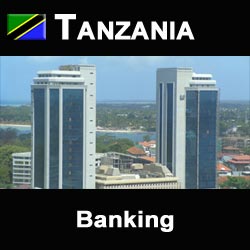 The Tanzania banking sector embarked on a plan for financial liberalization in 1992 in order to sustain its economic growth.

This has been accomplished through the mobilization of financial resources as well as by increasing competition in the financial market and by enhancing the quality and efficiency of credit allocation.

As a result of the liberalization, the banking sector in Tanzania has been booming, particularly over the last few years.

With a total of 27 banks and a few non-banking financial institutions, which are not allowed to open current accounts, the market is characterized by a few big players and several small banks.

In Tanzania, 90% of deposits are in the hands of eight banking institutions, namely three local banks and five foreign banks.

Local banks primarily service local customers while foreign banks tend to operate as subsidiaries of large groups, such as Citigroup and Barclays, using strategies oriented to the international market.

As a consequence, foreign banks focus on international customers and national clients who prefer to keep their deposits in foreign currencies.

Overall, the outlook for the banking industry in Tanzania is very positive and there are appealing opportunities for new comers to the sector.

Currently, there is a positive trend in lending to SMEs that is producing greater confidence in their growth potential among financial institutions and, more generally, in the economy as well, which is generating a positive spiral.

In addition, the government is also introducing new laws that are expected to enhance lending activities.