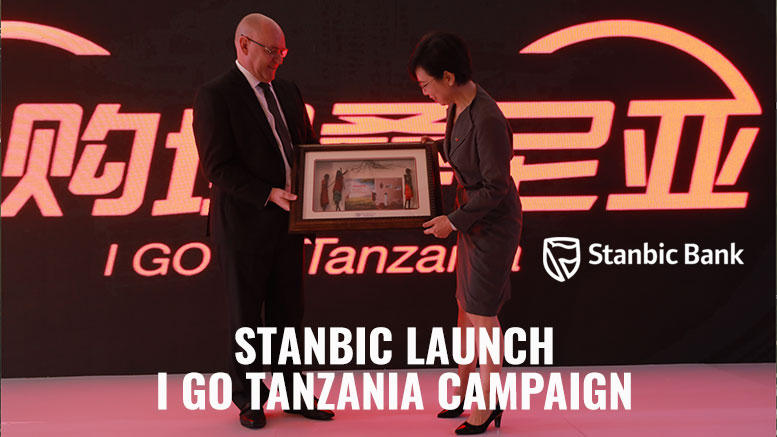 Stanbic Bank’s Chief Executive, Ken Cockerill (Left) hands over a token of appreciation to Ambassador of China to Tanzania, H.E Wang Ke, at the launch of ‘I Go Tanzania’ campaign.

To cement trade ties, boost investment flows and encourage tourism between Tanzania and China, Standard Bank and the Industrial Commercial Bank of China (ICBC) have launched the I Go Tanzania loyalty program in partnership with Tanzania Tourism Board (TTB).

This initiative, part of ICBC’s I Go Global rewards scheme for its cardholders in China, was unveiled in Tanzania on 6th August 2019.

It will capitalize on the growing appetite among Chinese travelers to visit Tanzania by offering a range of discounts and special offers from merchants across the travel, hospitality and lifestyle sectors, says Standard Bank’s group head of card and emerging payments across Africa in personal and business banking, Lincoln Mali.

“ICBC is the biggest bank in the world, with approximately 139 million credit cards and as many debit card customers,” says Mali, explaining the rationale behind the new loyalty program, which was designed by Standard Bank in partnership with the Chinese financial institution.

“Similarly, Standard Bank is the biggest bank in Africa, making this a perfect partnership.

Tourism from China has increased significantly over the last few years. This spells good news for the Tanzanian economy and for Standard Bank’s thousands of merchants.”

“We believe that I Go Tanzania campaign will offer our Chinese customers a seamless banking experience while they are here and will turn into mutual benefits for Tanzania’s economy,” said the Chief Executive of Stanbic Bank Tanzania, Ken Cockerill.

The I Go’ campaign combines both Chinese and Tanzanian advantages as the ICBC credit cardholders can enjoy convenient, comfortable and cost-effective traveling and leisure experience.

Mr. Cockerill also highlighted that the initiative will help promote Tanzania’s tourism sector and will increase the partnership and economic cooperation between China and Tanzania.

Welcoming the I Go Tanzania initiative, Minister of Tourism and Natural Resources, Hon Dr. Hamisi Kigwangalla said: “Tourism is the biggest foreign earner for Tanzania. This partnership represents a dynamic meeting of our two countries’ banking and business sectors, with the close involvement of the public sector too. In so doing, it perfectly illustrates how, in the spirit
of our #TanzaniaUnforgetable movement, tourism truly cuts across different industries and sectors, and affects each and every one of us.”

RELATED:  Home Loans in Tanzania – All You Need to Know

He added that tourism holds immense potential for growing the country’s economy and noted that the benefits and new avenues opened up by tourism are far-reaching and vast.

He hailed the I Go Tanzania private-public partnership and said that “tourism growth from China will help us in our ongoing drive to create new, sustainable jobs in the tourism value chain”.

I Go Tanzania offers a number of benefits specifically for ICBC cardholders traveling to Tanzania for leisure. These include up to 12% discounts on certain transactions and up to 30% discounts on unique wildlife safari getaways among many other incentives.

The Chinese Ambassador to Tanzania, Wang Ke, acknowledged the launch by describing the occasion as a new dawn between Tanzania and China. “Our partnership has borne nothing but good fruits so far and we are proud to be Tanzania’s largest trade partner and the biggest foreign investor,” she stated.

“In many cases, Chinese investment and trade has played an integral part in encouraging economic and infrastructure development in Africa, and in growing trade and investment flows between China and the continent,” says Gang Sun from ICBC. “The partnership between Standard Bank and ICBC has contributed to moving various African countries forward for many years.”

The group has been operating in Tanzania under the Stanbic Bank brand since 1995 focusing on all the key growth sectors in Tanzania, including agriculture, telecommunications, oil and gas, power and infrastructure and fast-moving consumer goods.

Tanzania Tourist Arrivals Down 51% in March 2020