MWAUWASA’s Managing Director, Eng. Leonard Msenyele and LVBC’s Executive Secretary, Dr. Masinde K. Bwire, signed the Project and Financing Agreement (PFA) in the presence of officials from the Ministry of Water of Tanzania.

The project is part of the Lake Victoria Basin Integrated Water Resources Management Programme (LVB-IWRM) and will benefit 7,360 residents in Mwanza City.

The LVB-IWRM Programme is based on long-term cooperation between the East African Community (EAC), the German state-owned investment and development bank Kreditanstaltfür Wiederaufbau (KfW), and the European Union (EU), and funded through grants by the EU and KfW.

KfW explains that Lake Victoria is the economic, social, and ecological basis for 40 million people. But it is under pressure: pollutants are being discharged, untreated sewage is being fed in and the population on its shores is growing rapidly. Fish stocks are threatened and the unique biodiversity is declining.

The LVB-IWRM Programme is implemented nationally in the EAC Partner States of Rwanda, Tanzania, Kenya, and Uganda with the republic of Burundi being considered for the second phase of the project.

Mwanza city is located in proximity to Lake Victoria, hence poses a major potential threat to water quality in terms of dischargeable untreated liquid wastes into the Lake.

The extension of 14.4 km of infill sewers and 1,600 connections of the Mwanza Sewer Network seeks to reduce such discharges into Lake Victoria. The areas of Mwanza City to be connected are Igogo, Kitangiri, Kirumba, Pasiansi, and Nyamanoro.

“With this contract and this program for Mwanza, we are going to make sure that Lake Victoria is going to be protected and it is not just a water issue because if the lake gets polluted, it means we won’t even get fish, so here we are talking about the nutrition issue as well,” said Engineer Charles Mafie of the Ministry of Water.d

For his part, the Executive Secretary of LVBC said that the project will be completed by the end of 2025. 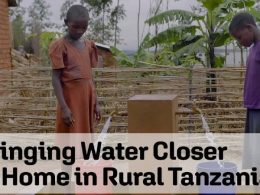