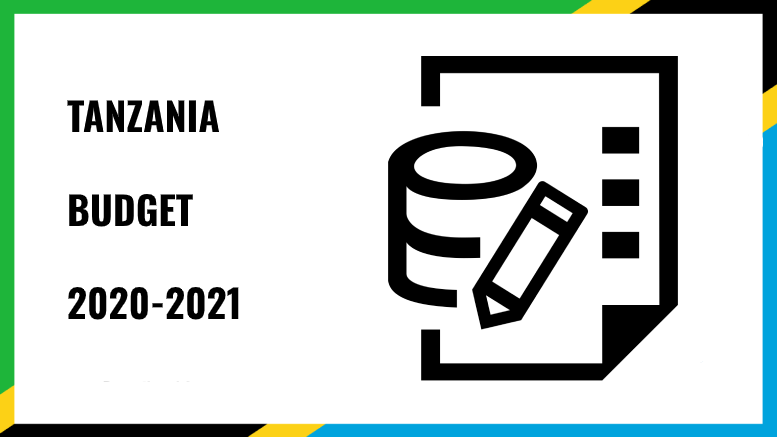 Tanzania’s budget for 2020-2021 amounts to TZS 34.88 trillion, 37% of which (TZS 13 trillion) is allocated to development projects. The remaining 63% (TZS 22.10 trillion) is dedicated to recurrent expenditure mainly servicing government debt and wages and salaries.

The budget plan indicates that TZS 24.07 are to be raised by domestic sources. Out of that amount, the Government plans to collect tax revenue amounting to TZS 20.33 trillion, nontax revenue TZS 2.92 trillion, and revenue from Local Government Authorities (LGAs) own sources TZS 815.0 billion.

The Government plans to borrow TZS 4.90 trillion shillings from the domestic market. Further, TZS 3.04 trillion is expected to be borrowed from external non-concessional sources in order to speed up the implementation of infrastructure projects. Development Partners are expected to contribute grants and concession loans amounting to TZS 2.87 trillion, equivalent to 8.2% of the Government budget.

During the presentation of the 2020/21 budget in June, Hon. Mpango reminded that in the 2019/20 budget, the Government projected to collect TZS 33.11 trillion from both internal and external sources, and by April 2020 TZS 26.13 trillion has been collected, equivalent to 92.4% of the annual target.

As of April 2020, the Government had released TZS 7.63 trillion for the implementation of development projects equivalent to 65.9% of the target.

Tanzania’s Minister for Finance and Planning Hon. Philip Mpango just presented to the National Assembly the budget proposal for the fiscal year 2020/21.

The President of Tanzania, Hon. John Magufuli recently received, on the behalf of the Government, TZS 1.05 trillion (USD 455 million) in dividends and contributions…

The World Bank (WB) has agreed to provide Tanzania with a concessional loan and support worth USD 1.7 billion, equivalent to approximately TZS 4 trillion,…

Tanzania’s Minister for Finance and Planning Hon. Philip Mpango recently presented to the National Assembly the budget proposal for the fiscal year 2019/20. The Government…

Tanzania’s Minister for Finance And Planning, Hon. Dr. Philip I. Mpango has presented to the national assembly the Estimates of Government Revenue and Expenditure (the…

The government of Tanzania plans to mobilize and spend TZS 31,712.0 billion in the 2017/18 budget, the Minister for Finance and Planning, Hon. Dr. Philip…

The Minister of Natural Resources and Tourism of Tanzania, Prof. Jumanne Maghembe recently presented at the parliament in Dodoma, the Ministry Program and Budget for…

Mr Doto James, Permanent Secretary of the Ministry of Finance and Planning, and H.E. Roeland van de Geer, Head of the European Union Delegation to…

The Bank of Tanzania (BOT) Quarterly Economic Bulletin for September 2016 shows that the country realized a budgetary surplus of TZS326.2b in Q3 2016.

Tanzania has identified key development projects for the fiscal year 2017–2018, which are deemed critical as their implementation has significant multiplier effects to the economy.