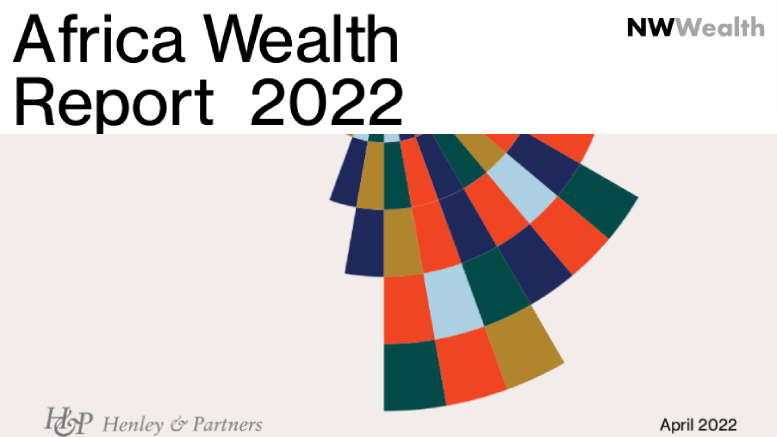 The report provides a comprehensive review of the wealth sector in Africa, including trends among high-net-worth individuals (HNWIs), the luxury market, and the wealth management sector on the continent.

The company explains that knowing where affluent individuals live, understanding their spending habits, and being aware of their preferences are critically important to the providers of wealth management and luxury services in Africa and globally.

–Billionaires: Individuals with wealth of USD 1 billion or more.

–Centi-millionaires: Individuals with wealth of USD 100 million or more.

–Multi-millionaires: Individuals with wealth of USD 10 million or more.

–Millionaires (HNWIs): Individuals with wealth of USD 1 million or more.

In the report, Vusi Thembekwayo, CEO of MyGrowthFund Venture Partners, stresses that while the number of millionaires on the African continent over the past decade has not increased exponentially, the number of centi-millionaires and billionaires has shot up.

And over the next decade, the trend of accumulating wealth will continue, particularly in the economies that are built on technologies, driving inclusion and the now in-vogue environmental, social and corporate governance criteria that are attracting new capital into the fold and creating more liquidity in the secondary capital markets.

According to the report, larger African countries have an obvious advantage because of their higher populations.

Accordingly, the “Big 5” wealth markets in Africa are South Africa, Egypt, Nigeria, Morocco, and Kenya. Together these five countries account for over 50% of Africa’s total wealth, which refers to the private wealth held by all the individuals living in a country.

South Africa is home to over twice as many millionaires as any other African country, while Egypt has the most billionaires on the continent.

According to the report, Tanzania has a total private wealth of USD 56 billion, and a wealth per capita of USD 940.

The Africa Wealth Report also identifies the top 10 safari lodge choices for 2022, of which 3 are in Tanzania, namely the Singita Sabora Tented Camp, the Singita Mara River Tented Camp, and the andBeyond Klein’s Camp.