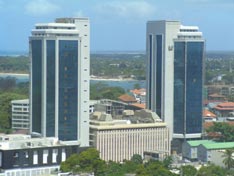 The Central Bank of Tanzania (BoT) has indicated in recent reports that it is not concerned about a possible further decline in the Tanzania shilling because a weaker currency could potentially help boost the country’s exports.

“The depreciation of the shilling is not excessive,” said Benno Ndulu, the governor of the Bank of Tanzania, during a recent conference in Dar es Salaam, “Over the last five years the shilling has depreciated by 20 percent, which translates annually into 4.5 percent each year.”

Governor Ndulu went on to explain that the difference in inflation between Tanzania and their trading partners currently stands at approximately 5 percent, which helps to explain the level of depreciation.

“Depreciation is not a bad thing necessarily,” said the BoT governor, “People always think that depreciation is bad, but it also improves or protects your competitiveness and enhances exports.”

According to the latest monetary policy statement that was released by the BoT, the depreciation of the shilling comes as a result of the general strengthening of the dollar against major currencies.

The BoT went on to explain that the exchange rate for the shilling would continue to be market-driven and intervention would be used primarily as a means to implement monetary policy and to alleviate short-term volatility.

The BoT was the primary supplier of dollars for the Interbank Foreign Exchange Market during the second half of 2010, selling USD 551.1m of the total USD 881.5m that were traded.

According to Governor Ndulu, after receiving a sovereign rating in the next few months, Tanzania is planning to issue a USD 500m debut Eurobond for the upcoming fiscal year, which begins in July.

“We are in the final stages of preparations for acquiring an advisor both for the sovereign rating as well as preparations for the issuance,” he said, “So we think in about seven to eight months, we will be in a good position to have moved on this one. Certainly it will be in the next fiscal year — it won’t be this fiscal year.”

Benno Ndulu went on to say that Tanzania is hopeful that, like its fellow African nations of Kenya, Angola and Nigeria, it will also receive a credit rating of B+.

The BoT Governor explained that, in spite of the pressure that the country’s medium-term target of a 5 percent inflation rate could experience from rising food and oil prices, the bank remains confident that the final outcome would still be in single digits.

“We still keep our focus of around 7 percent GDP growth. We are under pressure right now from power (shortages),” he said, “GDP growth in 2011 might not be exactly 7.1 percent as targeted, but if the rains are okay and if oil prices do not go up further, and we resolve the power constraint that we have right now — we might still be able to do between 6.5 and 7 percent, for sure.”