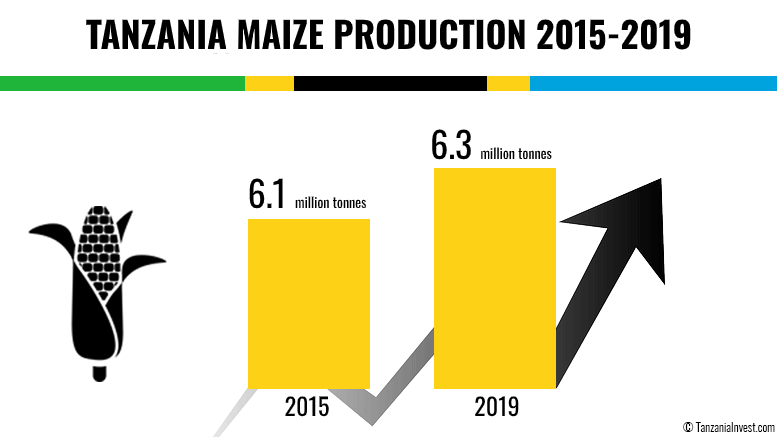 Tanzania consumes 90% of its maize production and exports the rest mainly to Kenya (80%), as well as Somalia, Burundi, South Sudan, Rwanda, and Uganda.

Smallholders produce over 95% of Tanzania’s maize. The majority of smallholders operate at a subsistence rather than commercial level, with an average landholding of about 0.7 hectares.

Approximately half of all the maize produced in Tanzania comes from the Southern Highlands and is usually grown under low input, rainfed conditions.

To further increase maize productivity, Tanzania has started trials for Genetically Modified Organism (GMO) maize, aimed at demonstrating whether the GMO crop can be effectively grown in the country.

Sources: Bank of Tanzania (BoT), Food and Agriculture Organization of the United Nations

WFP Buy 36,000 Tons of Maize from Tanzania and Will Buy More

The World Food Program (WFP), the food-assistance branch of the United Nations, has recently bought 36,000 tons of…

On November 21st, 2018, the Ministry of Agricultural of Tanzania has instructed the Tanzania Institute for Agricultural Research…

Tanzania recently signed a Memorandum of Understanding (MoU) with Zimbabwe for the export of 100,000t of maize in…