EUR 28 Million will go to Zanzibar to help connect households to drinking water and sanitation.

“The Tanzanian government is happy to receive the aid of 87 million Euros, which will help to a large extent to improve people’s lives,” said Dr. Nchemba while signing the agreement documents for the aid.

Dr. Nchemba explained that the aid will be directed to support the biodiversity of Tanzania’s national parks and hunting areas, thus increasing income and sustainable tourism.

The aid also aims to improve the health of the mother and child, strengthen family planning, especially for young people, and the universal health insurance coverage.

The funds will also be directed toward environmental sanitation and the conservation of water sources to enable more people to access clean and safe drinking water in mainland Tanzania and in the islands.

Part of the aid will also be directed to support gender equality, strengthening the rights of women and children by preventing all kinds of acts of violence against them in order to accelerate the development of the country.

Tanzania Annual Inflation Increases to Five-Year High to 4.9% in October 2022 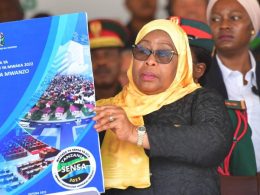 The President of Tanzania Hon. Samia Suluhu Hassan officially presented the release of the 2022 Population and Housing Census…
This website uses cookies to improve your experience. By continuing to browse the site, you are agreeing to our use of cookies.Accept
Privacy & Cookies Policy