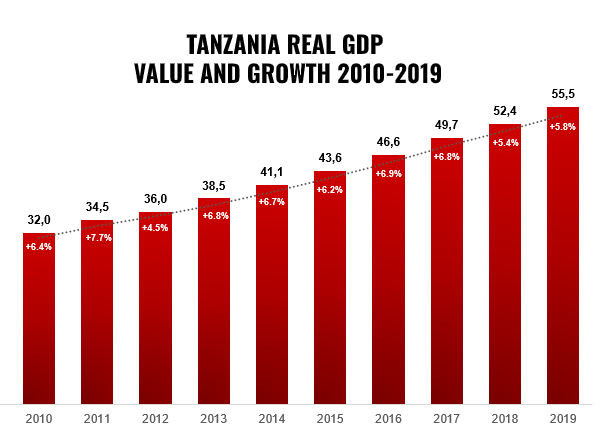 However, the International Monetary Fund (IMF) estimates that the growth of Tanzania’s economy will be 2.8% in FY 2020/21, down from a projected 5.9% before the COVID-19 pandemic.

Still, the Tanzanian shilling remained stable during 2019 and depreciated by 0.7% against the USD. The low volatility was in part due to interventions by the Bank of Tanzania (BoT) aimed at keeping the interbank foreign exchange market steady.

The mining sector, the oil and gas industry, as well as the primary agricultural products sector (coffee, cashew nuts, and tobacco) drew most FDI.

Investors are attracted to the country’s commitment to implementing sound macro-economic policies, its effective privatization program, and rich natural resources. However, low levels of industrial development, environmental concerns, lack of transparency, and poor compliance with legislation are obstacles to investment.

According to a recent report by the East African Business News, a plan to ease Tanzania business operations has been put in place based on…

In accordance with an agreement that was signed last year between the two countries, Norway has released the TSh55.2 billion it had pledged to Tanzania…

Construction of the new Sh8.5 billion cement plant in Tanzania is currently underway due to the sponsorship of the Kenya based firm, Athi River Mining…

A two-day Tanzania investment forum has been scheduled to take place in Arusha on December 11 and 12 of this year. According to the Regional…

{plusone}TANZANIAINVEST has conducted an exclusive interview with Mr. Emmanuel Ole Naiko, the former Executive Director of the Tanzania Investment Centre (TIC), in order to learn…