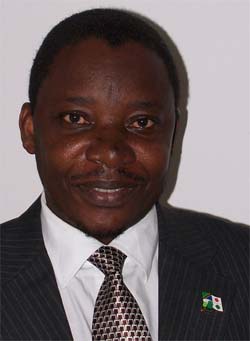 Overview of the Tanzania Trade Sector

TANZANIAINVEST has been interviewing Mr. Cleophas Ruhumbika, acting Director General of the Tanzania Board of External Trade (BET), in order to learn about the Tanzania trade activities as well as the investment opportunities within the country.

TI: Could you give us an introduction to the purpose of the Tanzania Board of External Trade (BET) and its functions?

The Board of External Trade is charged with the responsibility of promoting Tanzania’s products across the borders.

It also concentrates on the promotion of non-traditional products to the rest of the world.

The distinction is the availability of any corporate body looking after a certain product, like with cotton, for example, we already have the Cotton Marketing Board.

In that sense, cotton is categorized as a traditional product, while the products that do not have their own board are the non-traditional ones.

Among the main activities that the Board of External Trade undertakes are market development activities, under which we are responsible for taking care of the development of markets for Tanzania products.

This is to ease market access for Tanzania to all markets in Africa, Asia, the Americas and Europe.

When we organize Tanzania participation in the trade exhibitions, we mobilize Tanzania exhibitors, and we take them to the market.

We also represent those who cannot attend the exhibitions.

The second main activity that the Board of External Trade undertakes is product development activity, in which we have to look at the various products.

This includes things like developing packages for Tanzania’s products, product adaptation, if necessary in some markets, labelling requirements, the pricing of the product and so forth.

For that we have the trade information centre which collects all the data for foreign businesses.

The third activity is the provision of trade information.

We are responsible for the collecting, analyzing, storing and disseminating of trade information to the business community.

We host activities, for example the Board of External Trade is the host for the trade point, which is a web-based interactive trade platform.

On a daily basis, we receive all of the trade opportunities that are generated from our network, the World Trade Point Federation.

But more so, we are doing it through our corroborative efforts with the Chamber of Commerce in Agriculture, which has a wide network of branches all over Tanzania.

We also do the capacity building; empowering the business community, for example, through education such as export promotion related training, in order to impart knowledge to the business community for them to do their business more professionally, as well as to have a wider view on how to access the international markets and the preferential arrangements that are available for them to be able to tap those opportunities.

So, capacity building complements our other activities of disseminating information [that was] obtained through research or from our networks of information in seminars and workshops.

The last, but not the least, of the activities we undertake is trade facilitation and policy issues.

By trade facilitation, the Board of External Trade is responsible for designing the export and import documentations.

In the past, we used to offer to the exporters the various incentives which now are no longer there, some have been transferred to other organizations like the Bank of Tanzania, the Tanzania Revenue Authority and to the Chamber of Commerce.

On the policy issues, the Board of External Trade, as an arm of government, is responsible for promoting trade.

We participate in the various forums during which the government intends to put up various policies.

We were consulted on development strategy and economic empowerment policy and we gave our input.

We also participate in various policy meetings that are being held, [for example] recently we were invited to the new foreign policy workshop based on economic diplomacy, where inputs were needed from trade related organizations and investment and tourism related organizations.

TI: Is export promotion the sole responsibility of the government in Tanzania?

CR: Export promotion is essentially a government co-function for many countries worldwide.

Export promotion is a responsibility for the central government because local business people are happy to trade locally and, if the government is not facilitating business, people venture to other external markets and you will find a situation where so many traders are looking inward and the government needs the country to develop.

So, in that case it has to import some essential supplies, it has to service the external debt so it needs foreign exchange.

How does government get foreign exchange? It is through facilitating the business people to venture into the exports market.

This is why the export promotion is a co-function of the government.

This is a trend the world over and even import promotion is a co-function of the government like in the Netherlands or Japan.

Those activities will, therefore, be assumed by the private sector.

We get funding from the government for the salaries, 75% of our budget is generated from the operation of the trade fair and 5% is provided by the donor community.

We are now in the process of transforming the Board of External Trade into a different organization which will be responsible and capable of implementing the national trade foreign policy.

Outlook of the Tanzania Trade Sector and Investment Opportunities

TI: What is the outlook of the export related industry in Tanzania?

CR: We have just come out of an economic crisis and we have been putting the policies in place and we have also been undertaking the necessary privatisation process.

Now, we are about to embark on adequately developing production.

The problem we have there is not the access to the markets, as Tanzania has preferential markets for Tanzania products.

For example, in the East Africa Community our exports to Uganda and Kenya are duty free as we are members of SADC and METZ, we have reduced tariffs and we have quota free and duty free market entry into the South African custom union countries.

We are also members of AGOA, EBA, China, Japan, Canada and Korea.

All of these are markets are for Tanzanian products.

The problem is internally on the production side.

It is so because the economy is in crisis and the government decided not to continue doing business.

We have realized that the problem is on the production side and we intend to get feedback to the various producers who have taken up the entities which used to be run by the government to produce ready products for the market.

The infrastructure is already there.

In Dar es Salaam, we have two export processing zones.

To attract investors to Tanzania we need to address various problems so as to produce competitively.

Although the potential is there, in order to convert this potential into a competitive advantage we need to address other issues such as power tariff, infrastructure development, telecommunications, adequate supply of electricity and water, skilled manpower and so forth.

We need not address our problems separately in isolated cases, rather we need a holistic approach to analyse the situation and come up with concrete advice for the government.

If that is achieved, we have all the reasons for investors and local business people to put their money in the production side to produce both for the local and export markets.

TI: Would you advise foreign investors to invest in production and export in Tanzania? If so, why?

CR: Yes, the reason being that we are now forward looking.

The initial stage was to make a strategic decision for the government to disembark from business and economic activities, which the government has done.

Next, was to put the policies in place and to strengthen the institutions in order to service the private sector, institutions like the Board of External Trade and the Tanzania Investment Centre.

These institutions will play a key role in advising the government and in servicing the private sectors.

In a limited time scale we will be able to see the problems identified, suggestions made and the problems resolved.

TI: What would you wish to tell the prospective investors who are considering coming to Tanzania?

CR: The investment climate in Tanzania has done quite well, in terms of facilitating access to land, getting businesses registered and enjoying all the other incentives that are being offered.

For the market outreach, any investor will take interest because, by setting a factory in Tanzania, he can have preferential market access for all of those countries that we spoke about.{xtypo_quote_right}The market is still not saturated and the return on investment is high.{/xtypo_quote_right}

In Tanzania we enjoy political stability.

We are signatories to the various international conventions, whereas investment done in Tanzania cannot be nationalized or misappropriated in anyway.

The market is still not saturated and the return on investment is high.

We have done studies and it is evident that Tanzania has a comparative advantage for some products and, if all of the problems we currently have are resolved, you would be able to make good money.