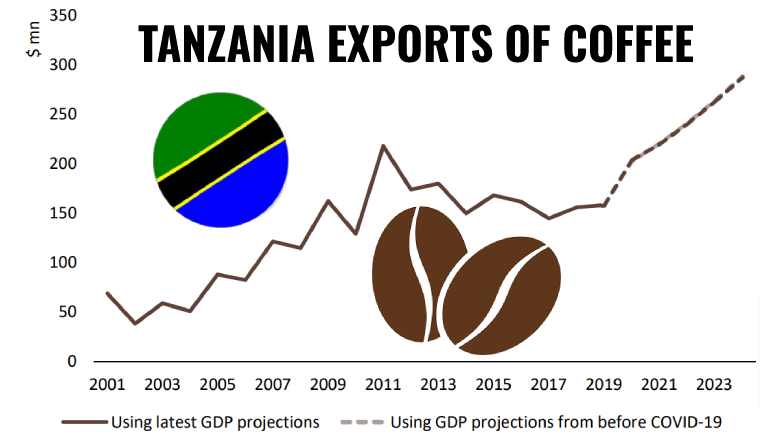 The International Trade Centre (ITC)-a development agency fully dedicated to supporting the internationalization of SMEs-estimates that despite the Covid-19 pandemic, Tanzania’s coffee exports are predicted to rise continuously over the coming years.

In its recent study titled “Tanzania’s Trade in Times of Covid-19: an Analysis for the Avocado, Coffee, Spices and Tea Sector” the TIC provides an overview of Tanzania’s exports of coffee prior to and during Covid-19, and estimates their evolution over the next few years.

Tanzania exports coffee to all world regions, with the EU being the largest market receiving 40% of the exports.

Within the EU, the most important destinations include Italy, Germany, and Belgium. Other main markets for Tanzanian coffee are Japan (34%) and the United States (17%). African countries account for 9% of Tanzanian coffee
exports, led by Uganda and South Africa.

Tanzanian coffee exports followed a similar trend, peaking in 2011 and stabilizing afterward. However, growth was less pronounced than for world exports. Tanzania’s exports in 2019 reached 230% of their 2001 value. As a result, Tanzania’s share in world exports has decreased since 2001, from 1% to 0.5%.

Results need to be interpreted with caution, but data points in April and Jun suggest that coffee exports could remain stable despite Covid-19.

Regardless of the Covid-19 pandemic, Tanzania’s coffee exports are predicted to rise continuously over the coming years.

Tanzania Exports Increase by 9.4% in Year Ending May 2016

Tanzania Exports Down -3.8% in Year Ending November 2017, Tourism and Fish Up