The President of Tanzania, Hon. Samia Suluhu Hassan has met with the President of Egypt, Hon. Abdel Fattah El-Sisi, on 9th November 2022 on the sidelines of the COP 27 meetings in Sharm El Sheikh.

In the meeting, the leaders discussed various issues related to the relationship and cooperation between the two countries, especially the existence of specific strategies to increase trade and investment.

For his part, President El-Sisi offered his condolences to the government and people of Tanzania for the victims of the plane that crashed into Lake Victoria.

He asserted the vital role that Tanzania plays, as one of the active countries in Africa, as well as its efforts to enhance security and stability in the continent.

He also stressed the strong historical relations that the two countries share, and Egypt’s keenness to strengthen them at all levels, particularly the Egyptian investments in vital sectors, mainly the construction of the Julius Nyerere Dam to generate hydroelectric power.

The dam is being built by an Egyptian consortium of Arab Contractors and Elsewedy Electric.

For her part, President Hassan expressed her sincere appreciation for the President’s condolences. She confirmed the deep and close relations between the two countries and looked forward to advancing cooperation with Egypt in all fields, in light of the pivotal role it plays regionally.

She noted the broad prospects for developing cooperation between the two countries in many fields, especially at the economic level, and expressed appreciation for the technical support that Egypt provides to her country in the field of capacity building over the past years, especially within the framework of the Julius Nyerere Dam, which Tanzania considers one of the country’s major vital projects.

President Hassan also extended her sincere congratulations and appreciation for the President on the occasion of Egypt’s successful organization of the global climate summit, considering it a historic success for Egypt and the entire African continent.

The two presidents also confirmed their alignment in views on various political issues as well as on the importance of enhancing integration among African countries, especially in the economic and trade fields, and developing the infrastructure.

On Monday 14th November 2002, the Embassy of Italy in Dar es Salaam launched in Tanzania the 7th… 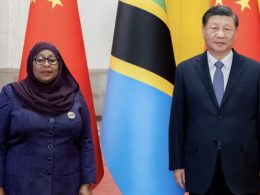 Following the invitation of the President of China Xi Jinping, the President of Tanzania Samia Suluhu Hassan made…
This website uses cookies to improve your experience. By continuing to browse the site, you are agreeing to our use of cookies.Accept
Privacy & Cookies Policy