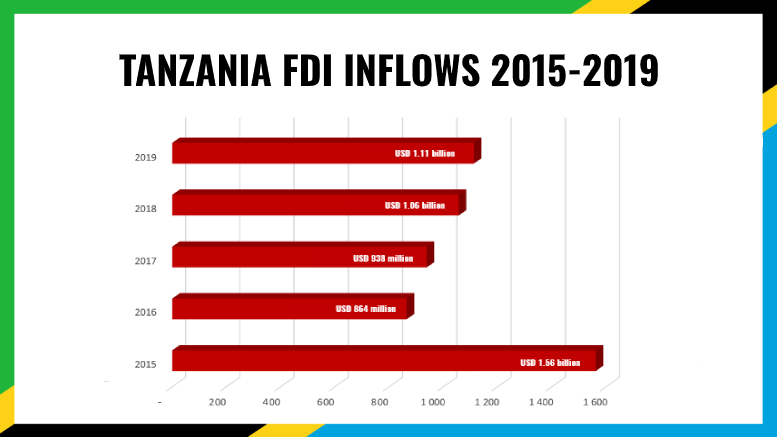 FDIs to Tanzania were drawn mostly to the mining sector, the oil and gas industry, and the primary agricultural products sector (coffee, cashew nuts and tobacco).

Investors are drawn to Tanzania’s commitment to implement sound macroeconomic policies, its efficient privatization program and abundant natural resources. However, low levels of industrial development, environmental concerns, lack of transparency and poor compliance with legislation are barriers to investment.

In the WB’s latest Doing Business 2019 report, Tanzania ranked 144 in ease of doing business out of 190 countries

In 2017/18, the country has implemented a positive change in making it easier to start a business by launching online company registrations and thus reducing time and costs for entrepreneurs.

To further promote investment, in June 2018 Tanzania lowered the income tax rate for new investors in the pharmaceutical industry from 30% to 20%.

In 2019, the African Development Bank (AfDB) approved a USD 55 million facility to strengthen the implementation of reforms to enhance Tanzania’s economic competitiveness and private sector participation in the country’s growth.

The Bank’s support will finance the second phase of the Good Governance and Private Sector Development Program (GGPSDP) that will help close the 2019/20 financing gap and make key government agencies more effective.

Tanzania was among the leading investment destinations in Africa in 2015, the recently published 2016 African Economic Outlook (AEO) indicates.

TanzaniaInvest had the pleasure of interviewing Clifford Tandari, Chief Executive until May 2017 of the Tanzania Investment Centre (TIC), the primary agency of the Government…

The Tanzania Investment Centre (TIC) has signed on July 18th, 2016, a Memorandum of Understanding (MoU) with www.TanzaniaInvest.com to cooperate in promoting Foreign Direct Investments…

Tanzania is expected to continue attracting private equity investments thanks to industry growth and increased competition for deals.