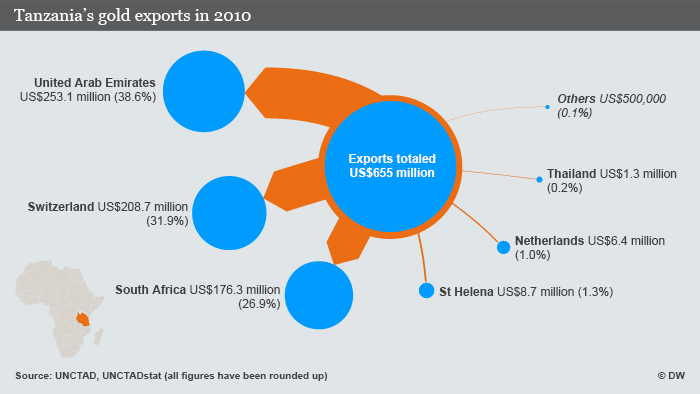 Tanzania gold reserves are estimated at about 45m ounces (oz). Gold exploration has been centered mostly on the greenstone belts around Lake Victoria, where several large deposits have already been discovered and are being developed.

Gold production in Tanzania stands at around 50t per year which makes it the 4th largest gold producer in Africa after South Africa, Ghana and Mali.

Gold export accounted for USD1.3b of the total value of Tanzania’s export in 2015 (i.e. 22%), representing more than 90% of the country’s minerals export.

Tanzania’s gold export remained steady over the past 5 years with USD1.3b in 2010.

Bulyanhulu is an underground gold mine in the Shinyanga region of Northwestern Tanzania, located 55km south of Lake Victoria and operated by Acacia Mining (LON: ACA).

Bulyanhulu commenced commercial production in 2001 and has produced over 3m oz of gold to date.

The current life of the mine is estimated to be more than 20 years, based on its proven and probable gold reserves of 6.1m oz.

Buzwagi is an open pit gold mine in the Shinyanga region of Northwestern Tanzania, located 6km southeast from the town of Kahama in Tanzania. It is also operated by Acacia Mining.

Buzwagi commenced commercial production in 2009 and has produced over 1m oz of gold to date.

The current life of the mine is estimated to be 4 years based on its proven and probable gold reserves of 0.6m oz.

North Mara is a combined open pit and underground gold mine in the Mara Region of Tanzania and also operated by Acacia Mining.

North Mara commenced commercial production in 2002 and has produced over 2m oz of gold to date.

The current life of the mine is estimated to be 9 years based on proven and probable gold reserves of 2m oz.

Geita is an open pit gold mine located in the Geita region of Northwestern Tanzania.

Geita started operations in 2000, initially as a joint venture of AngloGold and Ashanti.

With the merger of the two companies in 2004, the mine became fully owned by AngloGold Ashanti (JSE:ANG, NYSE:AU, ASX:AGG).

Since 2000, the Geita gold mine has produced more than 3m oz of gold.

New Luika is an active gold mine in the Mbeya region of Tanzania. It is fully owned by Shanta Gold (AIM: SHG), which started gold extraction in 2012.

Golden Pride was an open pit gold mine located in the Tabora Region of Tanzania.

Resolute, an Australian mining company, began construction of the Golden Pride mine in 1997 and operated the mine for 15 years producing more than 2.2m oz of gold.

Tanzania Royalty Exploration Company (TSX:TNX, NYSE MKT:TRX), has announced the initiation of the process of production at the initial target on the Buck reef prospect….

The World Bank has announced the launch of a pilot project aimed to improve the conditions and livelihoods of small-scale miners in Tanzania. The pilot…

Shanta Gold has announced the 2014 production levels at its New Luika Gold Mine (New Luika) in south western Tanzania, with projections indicating that they…

State-owned Tanzania gold mine, Stamigold Biharamulo, has announced plans to expand production in their Lake Victoria area mine to reach 40,000 ounces of gold in…

Tanzanian Royalty Exploration Corporation (TRX) has announced the completion of four heap leach cells, each measuring 100 meters by 30 meters, to support the processing…

The largest Tanzania gold producer, African Barrick Gold (ABG), has released a report indicating that it contributed a total of USD 850 million in 2013…

State Mining Corporation STAMICO is now in control of the Tulawaka Gold Mine after successfully acquiring it from African Barrick Gold (ABG). The gold mine…