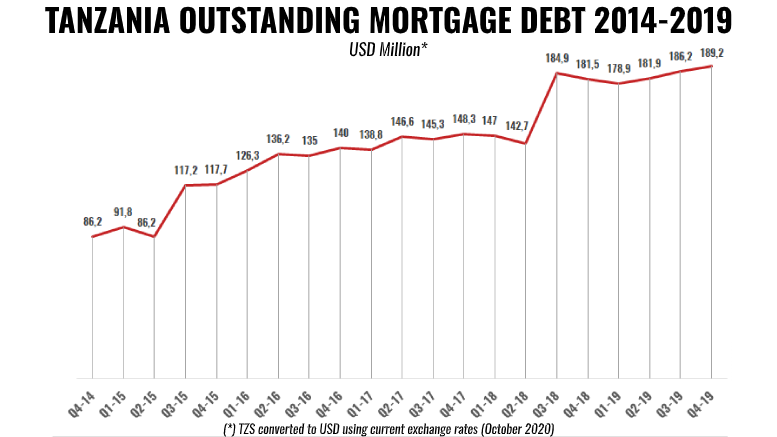 The number of mortgage lenders increased from 32 in 2018 to 34 in 2019 following the entrance of Ecobank Tanzania and the Tanzania Postal Bank during the year.

High interest rates and lack of affordable housing remain the major constraints on the Tanzanian mortgage market growth despite the high demand for housing and housing loans.

Most lenders offer loans for home purchase and equity release while a few offer loans for self-construction which for the most part continue to be expensive beyond the reach of the average Tanzanians.

Expansion of Mortgage Finance in Tanzania

A key element in the growth of the mortgage market in Tanzania is the provision of long-term funding both in the forms of refinancing and pre-financing.

This role is fulfilled by the Tanzania Mortgage Refinance Company (TMRC), a financial institution co-founded by the Tanzanian Government and the World Bank in 2010 to support member banks to extend long-term mortgage loans to the public through provision of long-term funds.

Initially, TMRC was established as a member-based institution not lending to non-members. In July 2016, TMRC opened up lending to non-member banks as part of its strategy to expand its customer base and effectively fulfill its role of being a catalyst to mortgage lending in the country.

TMRC has already extended loans worth USD 65 million to 11 of its member banks and five non-member banks.

In 2019, refinancing and pre-financing mortgage loans advanced by TMRC to its member and non-member banking institutions were equivalent to USD 50 million or 26% of the total outstanding mortgage debt.

A significant opportunity therefore still exists for TMRC to refinance the remaining 74% of the mortgage market portfolio.

The value of mortgage loans in Tanzania registered a growth of 22% in 2018 compared to a growth of 6% recorded in 2017, the Tanzania Mortgage…

All you need to know about home loans in Tanzania, by Stanbic Bank. Homes are often a representation of something larger than a physical structure;…

The mortgage market in Tanzania registered a growth of 6% in 2017, compared to a growth rate of 16% in 2017, the Tanzania Mortgage Refinance…

The mortgage market in Tanzania registered a growth of 16% in 2016, according to the Tanzania Mortgage Refinance Company Limited (TMRC).

The Tanzanian mortgage market recorded an overall growth rate of 13% in January-September 2016.