Off-grid power in Tanzania provides 2MW, largely based on solar systems, to around 15% of the country’s 50m population.

This was indicated in a study undertaken by the Overseas Development Institute (ODI), the Global Off-Grid Lighting Association (GOGLA) with SolarAid, and Practical Action.

The Tanzanian pico-solar market has grown rapidly and is one of the largest in Africa with several mature players, such as Off Grid: Electric, Mobisol, d.light and Greenlight Planet.

The report notes that this rapid growth has led to a huge influx of low quality products entering the market.

According to the study, addressing this product quality challenge, enabling capital finance and raising awareness of solar in remote regions and with local government leaders, could accelerate the off-grid market and ensure that solar home systems become a more fundamental part of Tanzania’s electrification plan.

The study notes that several steps have been taken which support the off-grid sector in Tanzania.

VAT and tariff exemptions have been applied to imports of small solar products. These fiscal incentives are seen as a key reason for the growth of the off-grid sector in Tanzania.

However, batteries are not exempted from VAT, which causes particular issues for operators selling solar home systems where component parts of the product are separate.

Earlier in 2016, the Government of Tanzania signed a Memorandum of Understanding (MoU) with The World Bank (WB) to provide USD209m for the implementation of the country’s Rural Electrification Expansion Program.

The Program is implemented under the National Rural Electrification Program (NREP) 2013–2022 of Tanzania, which includes both on-grid and off-grid solutions.

NREP has 4 priorities: the connection of new customers to the grid in already electrified settlements, new connections to the grid, electrification through off-grid investments, and the development of renewable technologies.

Africa Energy Forum 2016: Off the Grid

The Africa Energy Forum (AEF): Off the Grid is a two-day conference focused on project opportunities for mini and off grid technology providers working in Africa’s energy space. 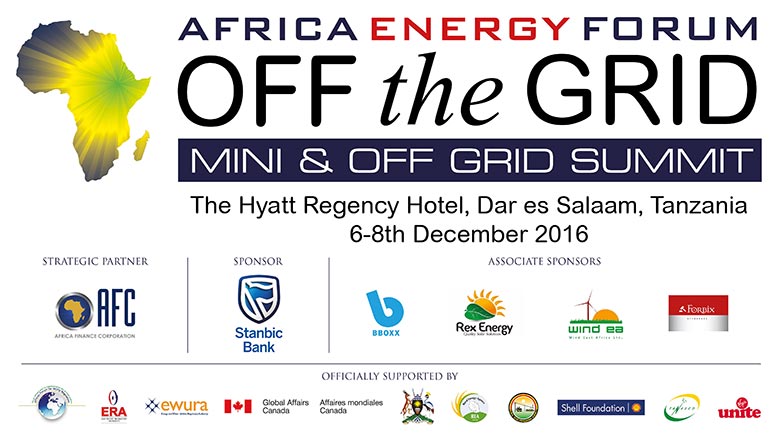 Updated Agenda for Africa Energy Forum: Off the Grid 2016 in Dar es Salaam

A full program for the Africa Energy Forum (AEF): Off the Grid in Dar es Salaam on 6th–8th…

UN Fund Invest USD80m in Africa Renewable Energy Ahead of Africa Energy Forum: Off the Grid 2016

The Africa Energy Forum (AEF): Off the Grid will be held at Hyatt Regency hotel in Dar es…