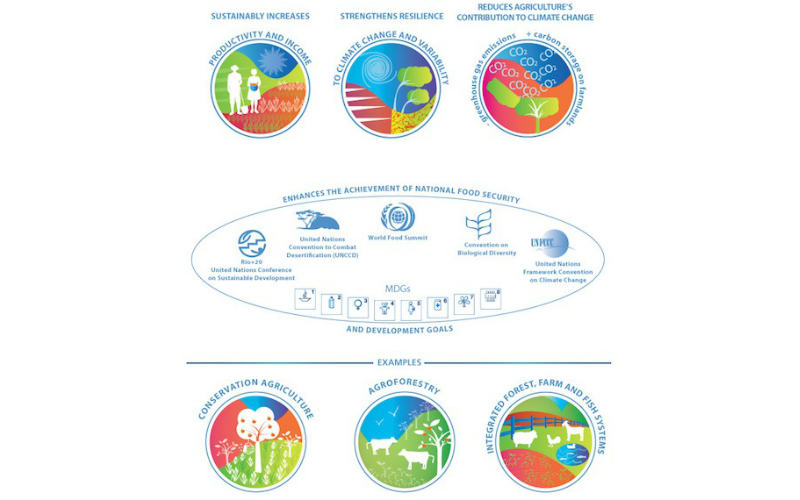 Tanzania’s Ministry of Agriculture, Food Security and Cooperatives has recently announced that it will soon release the Climate-Smart Agriculture Guidelines program on the Ministry’s website, meant to improve smallholders’ farming techniques to reduce the impact of climate change on crop production.

The Climate-Smart Agriculture Guidelines program is an additional government’s initiative to support small-scale farmers to address climate change mitigation and adaption by the implementation of climate-smart techniques to reduce deforestation and greenhouse gas emissions, explained Mrs. Shakwaanande Natai, Head of Environment Management Unit at the Ministry of Agriculture.

These climate-smart techniques have so far helped to increase crop production and local districts authorities are closely working with Tanzania Forest Conservation Group (TFCG) to spread their use further, explained District Head of Land Use and Marketing Information Network, Mr. Mark Farahan.

Climate-smart small-scale agriculture is being implemented in six villages in Kilosa and Chamwino districts in Dodoma and Morogoro, Tanzania’s central region.

The area was chosen by the Food and Agriculture Organization of the United Nations (FAO) as a pilot program in Tanzania which together with Kenya are being benefited with CCAP projects.

According to TFCG, the different projects being developed to implement climate-smart farming techniques have had positive results for small-scale farmers as improved profitability and better life quality.

Strengthening knowledge and tools for climate change adaptation is the last project being implemented in the pilot area at a total investment of GBP 1.5 million provided by DFID and that will be completed by March, 2016.

According to Tanzania’s National Adaptation Plan for Action (NAPA), agriculture is the second most vulnerable sector to the impacts of climate change by affecting the rainfall which has shifted from the October/November period to December/January in the last years, affecting crop plantation.

In addition, an increase on temperature of 0.7 degrees per annum since 2004, is making the lands more arid affecting the crops by increasing their evapotranspiration rate then water needs which currently experiences a shortage since climate change reduced its levels.

According to Tanzania’s Ministry of Agriculture, the adverse effects of climate change are reducing the crops subsector contribution to GDP at a rate of 2.47% per annum.