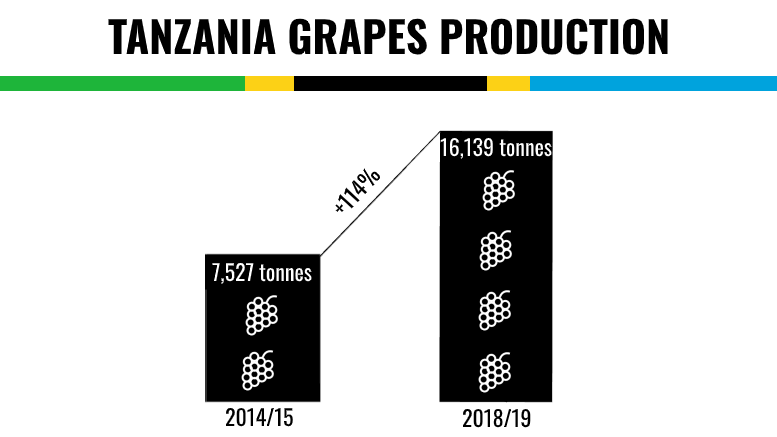 11,552 tonnes of the total production in 2018/19 were sold to local and foreign markets, 65% of which were sold to Tanzanian wine production factories, 19% were sold on the Tanzanian retail market, and the remaining 16% were exported to Kenya.

Grapes in Tanzania are grown and farmed mainly in the Dodoma region with grape yards spreading over 2,079 hectares.

In September 2020, Japhet Hasunga, Tanzania’s Minister of Agriculture, said that grapes will be included in the list of economic strategic crops like cashew nuts, cotton, coffee, sisal, palm oil palm, and tobacco.

This is part of the government’s plan to boost grapes and wine production in Tanzania. According to the Ministry of Agriculture, Tanzania has an advantage as it is the only country in the world with weather that allows the growing of grapes during two seasons within a year.

To facilitate a larger production of grapes, the Tanzania Agricultural Research Institute (TARI) is in the process of importing 13 new grape types from South Africa.

It seems we cannot find what you are looking for. Perhaps searching can help.