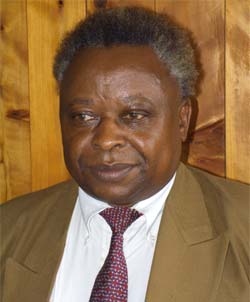 TANZANIAINVEST has been interviewing Mr. L. B. Minde, Postmaster General of the Tanzania Posts Corporation (TPC), to learn about the Tanzania postal and parcel services and also about the role of its institution within such framework.

TI: What is the current situation of the postal services in Tanzania?

L. Minde – Tanzania Posts Corporation: The postal service in this country has a very long history since back in 1948 when the governors in Britain, who used to administer Tanzania, Uganda, Kenya, put up a network covering the states of East Africa with one single institution.

With the first constitution broke up in 1977, each state put up its national postal network system.

The Tanzania Posts and Telecommunications Corporation came up in 1978 and went on as a combined institution until 1994, when the government decided to split up the telecommunication and postal services.

So, the Posts started operating as an independent institution in 1994 for the first time.

We cover all the government and regional centres and district centres as a matter of policy.

We hold that license on the set condition that we have to ensure people access to our post network, so whenever there is a demand for postal services we have to provide them with it.

This has not always been possible because of under-investment in the sector.

The Posts Corporation is fully owned by the government in this country, but the annual budget for postal developments is within the corporation.

In fact, it is by law required to operate on a commercial basis and to generate revenues to cover all costs of operations and revenues.

This is why it has not been easy to cover all the local areas of this country.

Consequently, our focus has been on the district level and where we have a high concentration of people.

To cover places or to subsidise some of the loss making in rural centres, where it is our social responsibility to provide such services, especially where we have schools, research centres and cooperative societies, we appoint agents or contractors to provide the postal services.

Currently, we have to 2 types of agencies: franchise holders, about 90 scattered all over the country, to operate almost all of the services, excluding banking services which is a mandate of the Tanzania Postal Bank.

The other category of postal agency in the rural areas, about 140 now, are normal traders and, at times, headmaster or teachers who agree to run basic services on our behalf.

TI: Some parts of Tanzania hardly have access to very basic postal services and, in other parts, people make phone calls through Voice Over Internet technologies. How do you see the development of postal services in consideration of increasing internet penetration?

LM: We have actually acquired an internet service provider to open Internet cafes in the Post offices and we now have about 15 stations.

Our intention is not to compete with internet cafes.

Our main concern is that the people who come to the post office to post letters, parcels or own a mail box, should also be in the position, if they don’t have a computer in their homes or office, at least to own an email address.

In that way, they can transact their business through the internet and rely on the post to deliver the packages.

Where we are not yet able to provide internet services and people require fast services, we can actually provide hybrid email.

That is, someone comes in the post office, accesses the internet or email address and transmits the message.

Then, this is transcribed as a letter and can be delivered to the receiver.

A return message can also be sent through the same hybrid system.

TI: Where do you see the future of postal services and of the Tanzania Postal Corporation?

LM: We actually see the development of the postal industry across the world in the provision of express and logistics services.

This is an area where the couriers have an advantage because they have organised themselves world wide and they are doing very well in the business.

That is why, in Tanzania, obviously you find DHL, Fedex, amd UPS, to name a few.

Their business is growing because of the convention covering the universal postal union members, where you can’t post a parcel in the network of more than 30kgs.

This is combined with the increase in international traffic and globalization.

So, we actually find that world wide postal institutions cannot handle more than 20% of the parcels or packages.

Per consequence, the future of the business is in air cargo and freight companies and all of these other transports.

What we actually intend to do at the Tanzania Posts Corporation, is to tap part of this increasing traffic also favoured by the improvement of ICT.

TI: How is the Tanzania Posts Corporation going to be able to compete with international consolidated couriers?

LM: If an International Courier doesn’t have an agent within a particular destination in Tanzania they can bring it to the post office and we will deliver for them.

Internationally, of course, the couriers have an advantage over us and that’s why they control about 70% of the outward parcels, but locally we control between 75% and 80% of the items (below 30 kg).

We are also looking at some sorts of alliances, like the one we have with DHL, for inward delivery and selected outward routes through our EMS (Expedited Mail Services) services.

In this way, we can take advantage of the courier track and trace systems while we provide the widest network in the country.

At the same time, through the International Postal Systems network we can track and trace items through our website.

However, because of limitations we have not been able to have this particular system in many places within Tanzania and we are trying now to set up the system to connect all the regions to the database in Dar es Salaam.

Our constraining factor in this development project has been first of all the capital funding requirements and restrictions imposed on the corporation by the Government.

Once the restructuring of the Corporation is completed, we expect to be allowed to access (borrow) to capital and investment funds.

The exercise was expected to be competed by October 2006, however postponement of government decision may see the exercise completed by the end of first quarter in 2007.

TI: What other projects or services are you looking to develop?

LM: We are looking at the Electronic Data Interchange network.

For our internal consumption, but also for our main clients, because currently we have some contracts with some Pension funds like the National Social Security Fund, and the PSPF who pay some of the pensioners through our network.

The same network is used by TCC (Tanzania Cigarette Company), to distribute their dividends for amounts of not more than 5 million.

We also assist in IPO’s where we are partners with the Tanzania Securities Limited broker house and we sell share certificates to the public on their behalf.

The same thing also applied with TWIGA CEMENT and DAHACO-SWISSPORT when they had their IPO’s.

TI: Is the Tanzania Posts Corporation going to be privatised?

LM: The Government has clearly stated that we are not going to be privatised and that has remained so for the past 9 years.

However, 25% of the shares of the Tanzania Posts Corporation can be open to investors if the government so decides.

They did that in Germany and in the Netherlands where it went very well and shares were oversubscribed.

So, it’s only the question of government of Tanzania deciding whether to own 100% of the institution or to give it management and financial independence and allow it to raise money from the private sector and the capital markets.{xtypo_quote_right}Given the increasing income per head, there will be more people in the service industry and we will witness a big demand for communication services.{/xtypo_quote_right}

TI: Where do you see the development in ICT in Tanzania and its impact on the national economy?

LM: I see a higher stage in terms of ICT use and, consequently, in terms of economic performance.

Most of the sectors will actually be performing better, once the infrastructure is stated out and we have a good development plan and implementation strategy.

Given the increasing income per head there will be more people in the service industry and we will witness a big demand for communication services.