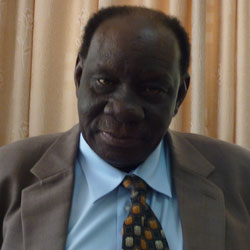 TANZANIAINVEST has been interviewing Hon. Stephen Wasira, former Minister of Agriculture Food Security and Co-operation, to learn about Tanzania’s agriculture sector and the country’s development strategy, as well as the role of China within such framework.

TanzaniaInvest.com: Can you please explain to our readers how important the agricultural sector is for the Tanzanian economy today?

Stephen Wasira: When you talk about the Tanzanian economy you are talking about an agricultural economy as 80% of our people are engaged in agriculture.

So it is very difficult to talk about economy in Tanzania without talking about agriculture.  Economy calls for the deployment of resources.

Our main resources are land and labour; and land employs 80% of the labour. Hence, agriculture becomes the major economic activity in the country.

TI: What have been the major evolutions that you have witnessed in the agricultural sector and how the country has been developing since its independence?

SW: Over the last forty something years since independence we have had several different policies.

Previously we were very much engaged in socialism, in which we tried working in cooperation and cooperative farming and we had a long period of exercising cooperatives, mainly during our first phase government.

What we are doing now, is giving first priority to agriculture. We have always been talking about agriculture because it is the backbone of our economy.

But actually there has never been a real evolution, because during those days we brought together people, and most of the people were farming collectively.

But then came a time when the economy was not doing very well, not only for Tanzania but for the world, when the world went through high oil prices in the 1980s.

And the economy went into recession because of the high prices.  Here in Tanzania we also had some problems with the collapse of the East African Community and then the war with Uganda that almost brought our economy down.

So in the 1980s the country had to undergo negotiations with the International Monetary Fund and the World Bank.

These institutions have several conditions for countries like ours, and we had to enter what we call “Structural Adjustment Program”, which we are still in now.

This program obviously emphasizes market economy rather than socialism.  However this Structural Adjustment Program did not give agriculture a priority, therefore there was disinvestment in agriculture.

Hence, during the 1980s up to the 1990s, agriculture suffered because we disinvested in research and therefore agriculture was given less importance.

With the Structural Adjustment Program we had to cut Government expenses and cut spending, and because agriculture was not a priority in the program, we cut from agriculture. So the agriculture sector went down.

TI: Do you feel that it has come back at all?

SW: It has come up now, with the new phase, the fourth phase government for which I have been a Minister for four years, out of which three have been here in the Ministry of Agriculture.

Now agriculture is averaging 4.8% of the GDP, which is not bad. We have also started a lot of programs to support the small farmers.

We have an Agricultural Sector Development Program (ASDP), which is basically an investment program, of investing into communities, trying to support these communities in small scale irrigation projects, giving farmers the knowledge about the ABCs of agriculture.

We have several projects under this program all of which have been financed centrally but implemented locally through the local government system.

This is the third year that we are trying to give some subsidies to the farmers. We call it farmer support.

Given the price of the fertilizer in the world market, they cannot afford to pay the market price.

So the government, through the budget, supports them by giving them vouchers with a certain amount, 50% of the market price of the fertilizers, and they use the input so they can produce more.

But we are also training the farmers now as we are trying to modernize the agriculture activities and take these small farmers from subsistence to production.

So we are now giving to the farmers the input, the knowledge, the fertilizer.

TI: In this modernization process, what is the role of international investors, especially Chinese?

There are several areas in which we agreed on how China could support us. One area is irrigation since they are well advanced in this field.

Tanzania’s agriculture is entirely dependant on rainfall and we cannot forecast this anymore because of climate change.

So what we are saying to the Chinese is that we want to use their experience, and get some technology from China which we can use in the process of modernizing our agriculture.

The second area in which we want the Chinese to work with us is in the establishment of an Agricultural Bank because you cannot modernize agriculture without credit.

Because you want the farmers to change, you want them to go into new technology, and technology has a cost.  Those are the areas where we are placing the emphasis on but there are more areas.

One other area in which we can invite Chinese to come is to establish some factories for the value addition of crops.

So we think if the right investors from China would want to come and put a plant to add value to our cashew nuts for example, then we welcome that investment.

TI: Some analysts consider China’s new involvement in Africa as a form of neocolonialism. Do you share the same point of view?

SW: No. Actually we have had an involvement with China for a long time, this is not a new phenomenon for us.

Our friendship with China dates back to the creation of the nation, when Julius Nyerere first went to China.

When he wanted the West to build the railway from Dar Es Salaam to Kapiri Mposhi in Zambia, and the West said it was impossible, he went to China, and China said they were ready for it and they did it.

So there is no question of neocolonialism, China is not coming here to replace the colonials.  If we are friends with the British who colonized us, why not with the Chinese?

TI: Where would you like to see the cooperation between China and Tanzania in agriculture five years from now?

SW: With regards to the cooperation with the Chinese, we want them to help us in the area of technology transfer.

We want to learn more and work with the Chinese on irrigation schemes so that we can assure ourselves food security and poverty reduction.

Likewise 70% of our people in the field of agriculture are using hand roll, it is very primitive, so China can help on the machinery part.

Chinese companies can bring their plants here, produce and use our area as a marketing center to other countries around Africa.

We can work with the Chinese in promoting research, and creating some agriculture center for technology, as the one we are trying to establish in Morogoro for rice production.

Chinese people are very friendly and we welcome them. Tell the Chinese “Asante sana!”

Exclusive Interview with Thomas Abraham-James CEO of Helium One