The 6th Edition of the Swahili International Tourism Expo (S!TE) included on 22nd October 2022 its very first investment forum for the tourism sector.

The forum showcased the potential of the tourism sector in Tanzania with presentations from the various government agencies under the ministry, highlighting the investment opportunities available.

In his opening remarks, H.E. Philip Mpango, Vice-President of Tanzania, emphasized that tourism is among the priority sectors of President Samia’s administration.

“The President has been championing the revamping of the tourism sector post-COVID-19 and through the innovative marketing documentary known as the Royal Tour, she has succeeded in revitalizing the sector and we have started to witness positive results in terms of increased tourist arrivals as well as revenues,” he noted.

He detailed some recent performances of the tourism sector included in the 2022 National Tourism Survey, with tourism earnings having recovered by 83% to 1.3 billion USD in 2021, with 922,692 tourists, representing an increase of about 48.6% compared with the performance in 2020.

He also stressed that the Government has continued to improve the tourism infrastructure, which includes the construction of the standard gauge railway and repairing roads, airports, tourist camps, hiking trails, and scaling up the national carrier Air Tanzania to facilitate travel within Tanzania, as well as connecting the country to key tourist source markets.

Most significantly, when addressing the investors present at the event, Vice-President Mpango stressed that the government recognizes the importance of the private sector as the driver and engine of the tourism sector over the years, and has been taking a number of legal and fiscal reforms to support the growth of the sector.

“Since 2020, the government has been working to align infrastructures and providing incentives to attract investment in mass tourism as our strategic tourism product. In addition, we are vigorously promoting other tourist attractions, especially in the southern corridor of our country, namely Makueni, which we believe has a great potential to boost this sector and take it to even greater heights,” Vice-President Mpango concluded.

For her part, Hon. Pindi Chana, Minister of Natural Resources and Tourism of Tanzania, explained that the sector’s contribution to the country’s GDP has approached 17%, and its contribution to foreign exchange earnings is not less than 25%.

The 6th Edition of the Swahili International Tourism Expo (S!TE) will be held from the 21st to the… 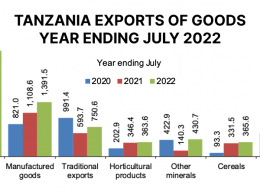 The Bank of Tanzania (BOT) Monthly Economic Review-August 2022 reveals that the country’s exports of goods and services…
This website uses cookies to improve your experience. By continuing to browse the site, you are agreeing to our use of cookies.Accept
Privacy & Cookies Policy