The value of mortgage loans in Tanzania registered a growth of 22% in 2018 compared to a growth of 6% recorded in 2017, the Tanzania Mortgage Refinance Company Limited (TMRC) indicates in its latest market update of 31 December 2018.

Mortgage debt advanced by top 5 lenders accounts for 70% of the total outstanding mortgage debt (59% as of 30 December 2017).

The Tanzanian housing sector’s fast-growing demand is mainly driven by strong and sustained economic growth with GDP growth averaging 6-7% over the past decade, the fast-growing Tanzanian population which is estimated to more than double by 2050 and efforts by the Government in partnership with global non-profit institutions and foreign governments to meet the growing demand of affordable housing.

During the year ending December 2018, growth of domestic credit by the banking system expanded by 10.1% with much of the expansion emanating from the recovery in credit to the private sector which grew by 4.9%.

This was largely associated with sustained accommodative monetary policy stance, and credit risk measures instituted, including the use of credit reference system in loan approvals.

The Tanzanian housing demand (which is estimated at 200,000 houses annually and a total housing shortage of 3 million houses), has also been boosted by easier access to mortgages, with the number of mortgage lenders in the market increasing from 3 in 2009 to 32 by 31 December 2018, and the average mortgage interest rate falling from 22% to 15%.

Efforts to develop a number of housing projects by developers continue with a special focus on housing projects in Dodoma as the Government continues with the relocation of its administrative function to the capital city of Dodoma, creating opportunities for local and foreign investors. 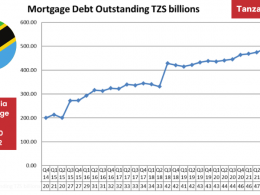