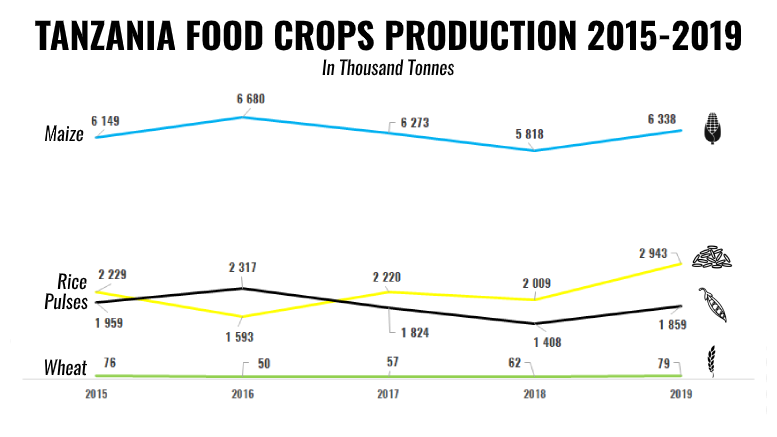 Tanzania consumes 90% of its maize production and exports the rest mainly to Kenya (80%), as well as Somalia, Burundi, South Sudan, Rwanda, and Uganda.

Crops productivity in Tanzania is still low by global standards as smallholder crop farmers have little access to modern farm technologies and inputs, relying instead on rain-fed farming.

In particular, the use of fertilizers by Tanzanian farmers remains very limited and below the recommended rates.

As a result, only 280,000 of an available 29 million hectares of irrigable land are currently being farmed. The Government of Tanzania is working to address these challenges by creating stronger links between commercial and smallholder farming.

According to a study by the European Commission, Tanzania presents significant opportunities for investments in export agriculture thanks to the availability of land and its membership in two regional trade groups: the East African Community (EAC) and the Southern African Development Community (SADC).

The Tanzania Agricultural Development Bank (TADB) has entered into a strategic partnership with the Clinton Development Initiative (CDI) to disburse up to USD 500,000 (TZS…

The Alliance for a Green Revolution in Africa (AGRA) President, Dr. Agnes Kalibata, has recently visited Tanzania to review progress on the small-scale farmers and…

The Tanzanian Ministry of Agriculture, Food Security and Cooperatives announced a plan to double seeds production, from current 30,000 to 60,000 tonnes, by 2015. The…