Tanzania’s Prime Minister Kassim Majaliwa recently disclosed that in the financial year 2021/2022, 630 new investment projects with a value of USD 3.68 billion implemented by Indian companies had been registered through the Tanzania Investment Center (TIC).

He said that this is thanks to efforts to improve the investment environment carried out by the current Government led by President Dr. Samia Suluhu Hassan. Thus, he has used the opportunity to invite other investors from India to come and invest in Tanzania.

Majaliwa also disclosed that India ranks third for having trade cooperation with Tanzania, with USD 4.58 billion in the financial year 2021-2022.

Majaliwa made the announcement on 19th January 2023 when meeting the delegation of the Indian Parliament led by the Speaker of the Parliament, Mr. OM Birla.

He said that Tanzania and India have had long-term cooperation in various sectors including economy, energy, water, education, health, business, and technology.

Majaliwa has assured Birla that Tanzania will continue the long-term cooperation with India, saying, “Our President has great hopes for the cooperation that exists between Tanzania and India and that the cooperation has been of great benefit for our countries. I call on our parliaments to establish a system of visiting each other and exchanging experiences, in order to promote cooperation.”

“In June 2022, we have witnessed six companies from India signing contracts for water projects for 28 cities worth more than USD 500 million which, when completed, will enable more than six million Tanzanians to get reliable water,” he added.

For his part, Birla said that the Parliament of India will be a good spokesman for the cooperation and development between Tanzania and India so that those countries continue to benefit from the existing cooperation.

RELATED:  UAE To Invest USD 7 Bln in Tanzania Over The Next 4 Years

India is the second largest trading partner of Tanzania with bilateral trade of USD 2.37 billion in 2020-21. India is also among the top five investment sources in Tanzania. 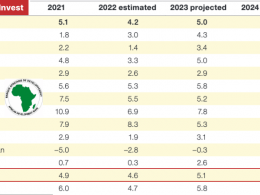