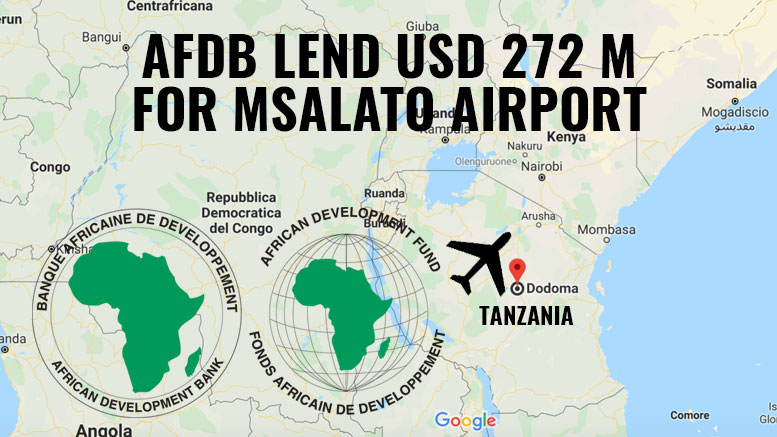 The African Development Bank (AfDB) has recently approved a USD 272.12 million loan to Tanzania for the construction of a new international airport in the capital Dodoma.

The funding package comprises a USD 198.6 million loan from the Bank,  USD 23.52 million from the African Development Fund (ADF) and USD 50 million in co-financing with the Africa Growing Together Fund (AGTF) — a co-financing facility of the People’s Republic of China managed by the Bank.

The new airport will be built in the district of Msalato, 12 kilometers from the capital Dodoma.

The project involves the construction of high-capacity airport infrastructure to meet the expected growth in air transport from the city’s new role as the administrative capital of Tanzania. It will replace the present airport serving the capital that cannot accommodate larger aircrafts.

Work will be carried out over four years and will include a passenger terminal, a runway, air navigation equipment.

The new facility is expected to handle at least 50,000 aircrafts and a million passengers per year.

It is estimated it will benefit and serve more than 200 million passengers in East Africa, as well as international trade networks, and especially business travelers and tourists.

Amadou Oumarou, the Director of the Bank’s Infrastructure and Urban Development Department, commented: “An expanded air transport network in Dodoma, together with the ongoing high-speed railway construction on the central corridor, are necessary infrastructure investments to help unlock and disperse spatial development in the countryside. This will strengthen the city’s potential as a strategic growth pole in keeping with Tanzania’s national development aspirations of fostering shared growth for all the regions.”

As of late November 2019, the AfDB portfolio in Tanzania comprised of 21 public and two private-sector operations, with a total commitment of approximately USD 2.1 billion.